It’s been too long. As always, there have been plenty of amazing things happening around town (and of course, some not-so-amazing things too), but this will be a pretty personal post, mostly making a record of some of my summer highlights.

July kicked off with a “moms’ morning out” date with a good friend and neighbour. We try to do this once  or twice a year – have someone else take care of the kids for a morning and then hit the town for what is usually a series of food-related stops we’ve been wanting to try. This time, we had an ambitious list of places we were hoping to make it to, and I was pretty happy with what we managed to fit in.

First up, we headed downtown, aiming to check out Fools & Horses on Broadway. We had parked a few blocks away because downtown was super busy that weekday morning, with something apparently going on at the Convention Centre — hundreds of people in beautiful and colourful outfits were converging there. We asked some snazzily-dressed people walking by what was going on, and they said it was Eid, a celebration marking the last day of Ramadan, and invited us to join them. We were pretty set on our morning plans but appreciated their welcoming gesture….friendly Manitoba! We made it to Fools & Horses and had fancy-schmancy toast (highly recommend the gouda/savoury fig toast and the Toast M’Goats) and coffee for breakfast, with a side of people watching. What a great location!

After our downtown adventure we made our way to Corydon. There were a couple shops we wanted to visit, but the real goal was to go to Pennyloaf Bakery. There we drooled over the amazing selection of breads and sweets, settling on the olive loaf and half-dozen cookies (I loved the flourless chocolate cookies). Lastly we made a stop at Make Coffee+Stuff for an iced coffee….delish. On the way back to our neighbourhood we stopped in a Dierbe, a natural cosmetics/toiletries shop on Marion, and spent way too long smelling basically every item in the shop. It was great.

(On our list of to-try places for next time: Sleepy Owl Bread, Clementine, PEG Beer Co.)

My family’s next big adventure was our annual summer road trip to Alberta to see my extended fam. We often stay with friends just outside of Regina for our mid-point overnight stop, and this time we stopped at A L’Epi de Blé bakery on Main St. to get some bread and pastries to bring our hosts. Man, trying to make a selection in that bakery is near impossible – everything looks and smells so divine. After I’d finalized my selections, the always-charming owner caught me ogling the cheese cooler and insisted on letting me sample some Laliberté cheese from Quebec, saying “I just want to see the expression on your face when you taste it” with a knowing grin. And she was right, it’s the sort of thing you can’t eat without a little sigh of pleasure.  I will be back for more of that.

The first day of our drive coincided with the inaugural Steinbach Pride, which I was able to follow quite closely on Twitter since my kids were being unusually well-behaved and self-reliant in the back seat. More than once, I teared up seeing the images of the crowds, and of all the groups that came from across Canada to be there. I  would have really liked to be there myself. In case you didn’t hear the backstory, this was the first-ever attempt at a pride event in Steinbach, and the organizers enountered a few obstacles in getting things going. They anticipated maybe 200 people would attend; between 2500-5000 showed up. I am almost moved to tears just typing that. #loveislove 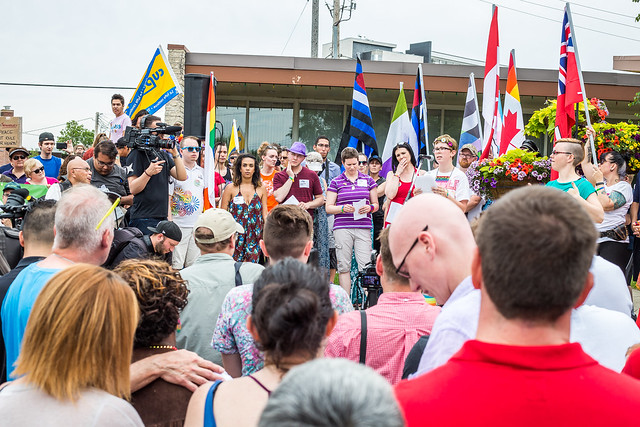 There were a few things I was keen to do in Lethbridge – most of them, of course, are just about being with people I love. I was also excited about a new microbrewery that had recently opened: Theoretically Brewing Company. On our first night in Alberta my BFF Aaron showed up with a couple bottles of theirs – Curiosity Amber Ale and Quantum Wheat Ale. Both were good, but I wish I’d had a chance to try the Publish or Perish Porter and the Black Hole Beer Stout. Next time!

While in “LA” (which is how cheesy 90s radio ads referred to Lethbridge, and so naturally what we call it with others in the know), we also went to the downtown farmers’ market. This is a relatively new event and I think it’s fantastic. Lots of great vendors and a nice atmosphere. Leaving the market we crossed at Lethbridge’s first-ever pride crosswalk and got coffee from the pop-up Penny Coffee House stand (the coffee shop where I basically spent 100% of my high school job paycheques).

You’ve come a long way, Lethbridge. There is no way a pride crosswalk would have flown even 10 years ago.

Coffees from my beloved Penny Coffee House (always the “Penny University” to me!)

I also loved going to the big Saturday farmer’s market at the exhibition grounds. I’ve been going to this market with my mum since I was a kid. The official smell of the farmers’ market to me is dill, and luckily, the aroma hasn’t changed a bit in 25 years. My all-time favourite Lethbridge farmers’ market buy is the Hungarian poppy seed roll (the walnut roll comes in a close 2nd). This year I also bought a couple bottles of honey wine from Spirit Hills to bring back as gifts.  And some aged gouda that was absolutely melt-in-your-mouth… though I can’t remember which cheese place that was from (I think probably Crystal Springs).

Back at home in Winnipeg we had a short break from being on vacation before heading out to Albert Beach for a week. My in-laws had rented a cottage there, choosing “la plage Albert” specifically because it is known for its large Franco-Manitoban community. I absolutely adored this place. Here is why:

At last, I had a chance to the imperial cookies from “the bakery in Victoria Beach” (which turned out to be Einfeld’s).

The legendary Imperial (imposter?) from Einfeld’s Bakery in Victoria Beach.

My verdict on the imperials? Well, to be completely fair, I’m not sure I’d classify them as a true imperial. Einfeld’s calls them “Dream Cookies” and they don’t have a piece of cherry on top, so I guess technically they can’t compete with “true” imperials, but they are remarkable similar. While the cookies were a little thick for my ideal cookie/jam ratio, they did taste *really* good. I would definitely eat them again.

We also tried a loaf of onion-cheese focaccia from Upper Crust Bakery. It was unreal. The crust was super buttery, almost oily. I feel like this isn’t really a trademark of an authentic focaccia, but man, was it delicious.

Our week at Albert Beach flew by, and at last, we were home sweet home for the rest of August.

As much fun as we had on vacation, I was really glad to be home. And luckily, there was more fun in store for me! A few things stand out:

A friend invited me to Folklorama – an event I always wish I made more of an effort to get to. We went to the Poland Warsaw pavilion and thoroughly enjoyed the food and dancing. The Glenwood Community Centre is a great venue, and the crowds were just big enough to feel festive, but not so big to feel overwhelming and crowded.

I also went to Movies in the Park at the Lyric Theatre at Assiniboine Park for the first time! A friend and I saw Spectre and ate our weight in snacks. I was amazed that by the movie’s end near midnight, even my hoodie, jacket, and fleece blanket were not enough to keep the shivers at bay. Next time, sleeping bag!

One Sunday, my brother- and sister-in-law showed up at family lunch with a big wedge of cheese from the Holland, Manitoba monks. Third time’s a charm, and they’d finally managed to secure the purchase of this elusive and delicious cheese!

This cheese is amazing, but I’m a horrible photographer. You’ll have to take my word for it.

We had a lovely porch night with our neighbours, catching up on Glenelm news and life in general, after a summer of crossing paths.  Our kids were thrilled to be reunited with their neighbourhood friends, and played together outside as much as possible before schools started up again.

Now the days are getting shorter, and summer is definitely on the wane. It was a great one, but I am ready for fall, having realized that I am not the sun lover I was even six or seven years ago. Fall and spring are more my jam, I’m coming to realize.

School starts tomorrow, and soon my calendar will fill up with appointments that are little less leisurely than summer adventures, but just as meaningful. I am hoping to write about some of those things soon.

Hope you all had a wonderful summer, too!

One Response to “Summer 2016 Highlights”