After seven years here in the ‘Peg, I sometimes think I’ve heard about all the “Winnipeg things” there are to hear about. But every now and then a new one pops up. 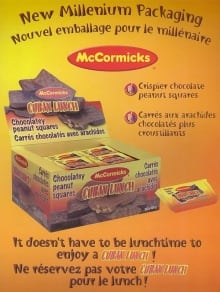 My massage therapist and I often talk about food during treatments and about this time last year, as we were discussing Christmas treats, she mentioned that one item she always makes for the holidays is a chocolate treat called Cuban Lunch – something I’d never heard of, despite being quite enthusiastic about holiday sweets. She said Cuban Lunch was a chocolate bar she loved as a kid, and that this was a homemade version. I was sold and wanted to make them right away, but alas, everywhere I went was sold out of butterscotch chips, so my hopes were dashed.

This year, I was still thinking about them, so I made sure I secured the chips in November so I’d be ready for holiday baking. A few nights ago I prepared the recipe — a bag of peanut butter chips, a bag of milk chocolate chips, a bag of butterscotch chips, and a cup and a half each of crushed salted peanuts and crushed ripple chips — and filled up dozens of little foil candy cups with the sweet concoction. After they’d set, I tried one – and they were pretty good, though my husband and I thought we’d use more peanuts and chips the next time, along with a nice dark chocolate chip instead of milk chocolate chips – they are awfully sweet.

Anyway, the next day a friend was over and I told her I’d made this recipe and she said she’d made them before too. I thought it was a bit odd that I’d never heard of them, but two Winnipeggers had. When my husband asked about the origins of the chocolate bar’s potentially culturally-insensitive name, we undertook some research. Here is what we discovered:

Sources: 7 Horribly Named Candy Bars | Balonie goes to the big city (a first-person account of working at the Paulins factory) | 8 retro candies you wish you had right now

So – dear readers, you have always been a fountain of knowledge and I’m sure someone around here can give us the inside scoop — I know there are some Paulin’s Puffs lovers out there; maybe somebody knows more about the company? What’s the story behind the name? When did they stop being made? Were there chips in the original?

Until then, I’ll be trying not to eat all the 80 knock-off Cuban Lunches currently in my freezer, awaiting their dispatch to dainty platters and care packages. Wish me luck!